Getting ready for sleep deprivation mode?

Leading up to the World Cup (which competes with the Olympics for best sporting event in the Universe), I will be previewing each team participating in the Brazilian extravaganza (in my own 4 part extravaganza). This week I will be looking at teams ranked 25 – 32 (AKA the minnows). Rankings are according to the current market odds. I will leave my predictions for part 4. Unfortunately, (for their respective fans) Australia, the Korea Republic, Greece and Cameroon are named among them despite better form in past years. Firstly, a few words on another issue.

FIFA’s seeding policy comes under increasing scrutiny as we move closer to kick-off. Part judgement (teams are sorted into four pots based on seedings (pot 1) and the balance (pots 2-4) to ensure that teams from the same region do not as far as possible overpopulate a group)) and part luck (groups are then selected one team from each pot), it does seem to always throw up a group of death (or two). There were a few wrinkles which are explained here this time.

Most countries seem to believe that their team is currently residing in the group of death. It seems the case every World Cup but a cursory look at the popular news outlets at the time of the release of the groups will tell you this as well. On some occasions, teams fall into one of the ‘easier’ groups and get a saloon passage to the second round while other deserving teams struggle and scrap against equally highly ranked teams where it seems unfair that only two can emerge. What other way could FIFA do it? American College Football has utilised a system which relies on a variety of weighted rankings from computers, the media and the coaches to arrive at the eventual participants (also controversial). Using the FIFA rankings to rank the teams could produce pools with all European countries and would still be controversial.

It is probably part of a broader question in Football, which is, how do teams qualify for the World Cup and should certain federations be granted more or less qualification spots than they already have?

Just utilising average current FIFA rankings (themselves subject to opinion and conjecture) it would seem that the groups rank in descending order as follows:

That is a fairly large range of average rankings, although ranking the pools this way seems to artificially skew the rankings, especially if the fourth team is very lowly ranked.

On to the rankings:

2001 (that’s some long odds, for instance, Sportsbet is currently quoting 1001 for the End of the World occurring due to Zombie Apocalypse (if you won that one you would be one rich zombie, if Zombie Sportsbet would pay out that is) – you know you’re going to do badly when Zombies are getting better odds)

Maynor Figueroa – This experienced campaigner who plies his trade in the EPL for Hull will need to stand up to give Honduras a chance of progressing to the next round.

American writer O. Henry first applied the term ‘Banana Republic’ to Honduras because of the influence that American banana companies had on the country at the time.

Like Helium, Honduras will be a relative lightweight in this competition. Their World Cup campaign is likely to end at the Group Stage. Unheralded and at long odds to even win their first game at the World Cup Finals (third visit), they may (with their sprinkling of talented players) embarrass any of the teams that take their eye of the ball, especially if France forgets to turn up.

Bryan Ruiz – The creative striker/midfielder will need to ensure that he heavily influences all of the group stage fixtures for Costa Rica to have any chance of progressing.

Ar – Argon – Argon is a noble gas. It is colorless, odorless and extremely unreactive.

Buried behind Uruguay, Italy and England, Costa Rica is unlikely to emerge from one of the Groups of Death. Playing a predominantly defensive game to qualify for the Finals they will need to produce some attack and hope that the closeness of this group might jag them a second place finish. That is an extremely unlikely scenario.

BTW how cool is the Columbus Crew as a team name. I think after I’ve finished driving Plymouth Argyle to the top of the Premier League in FIFA 2012 (yes I know I’m a few years behind) I’ll have to manage the Crew.

Sofiane Feghouli – This Valencia sharp shooter came from the French system and is crucial to any hope Algeria has of progressing. One of the young guns who populate the attacking ranks of this team (which historically relies on resolute defence to keep with teams) Feghouli will need to fire.

Over 90% of Algeria is covered by the Sahara desert.

Xe – Xenon – Xenon is a rare, colorless, odorless heavy gas. Xenon is inert towards most chemicals.

With an exciting blend of young (predominantly French born) talent Algeria figures to improve on their most recent foray in the World Cup Finals in 2010 where they played gamely but failed to score a goal. In the group with Belgium, Russia and the Korea Republic, they could have done worse and will be earmarking at least one of those games for a win. This is still unlikely but they should be closer than in previous years.

Javed Nekounam – The influential midfielder central to the defensive starch which typifies this Iranian team will need to facilitate their attack if Iran are to make a noise in this World Cup.

Iran is the pistachio capital of the world.

Rf – Rutherfordium – A radioactive element whose physical properties are not known since only atomic quantities have been produced so far which quickly disappear when first prepared.

Embroiled in a club vs country dispute which resulted in only a small portion of the squad being available for their pre-tournament camp, Iran shouldn’t be around long in this tournament. In a group with Argentina, Bosnia and Herzegovina and Nigeria they are the favourites to go out the door first, however their less than perfect preparation will only make this more likely.

I’m giving Tractor Sazi the nod for my favourite club name in this team. Honourable mention goes to Foolad Khuzestan.

Samual Eto’o – The Chelsea forward is a talismanic figure for this African giant and they will be counting on his potent (though waning) finishing abilities to get them out of the group stage.

Cameroon is one of the wettest lands on the earth with annual rainfall of about 1028 cm.

Ne – Neon – Neon is a light, very inert gas. Colorless under normal conditions, it glows a reddish-orange in a vacuum discharge tube.

The Lions of Cameroon are fast and physical (and like Neon) will be a team to watch in Brazil. Unfortunately, their past reputation will not necessarily translate into success in these Finals. The game against Brazil will be a guaranteed loss, however, Croatia and Mexico have recent histories of underperformance at this level. Only time will tell whether the Lions will evaporate after the first round. 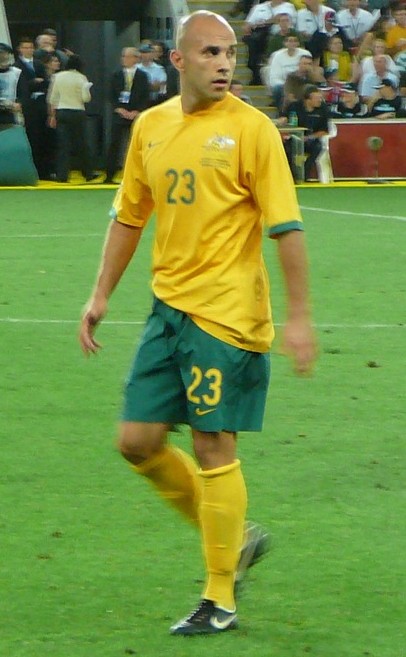 Tim Cahill – Coming to the tail end of his career (this is probably his last World Cup) Australia will need him to fire in front if they are to have any hope of progressing.

Melbourne has the second largest Greek population in the world behind only Athens.

Cl – Chlorine – Chlorine is a greenish-yellow, diatomic, dense gas with a sharp smell (the smell of bleach). It is not found free in nature as it combines readily with nearly all other elements.

After receiving 6-0 drubbings from both France and Brazil, no-one (least of all the Australian fans) are expecting much from the Socceroos. Ange Postecoglou has picked a mixture of youth and experience this time around, clearly with an eye on the future. Famously competitive they will rely on their physicality and grit, however, a quick exit is likely against the quality of Spain, the Netherlands and Chile (all chances of holding the World Cup in their hands come the end of the tournament).

I’m a bit partial to Nagoya Grampus this time. What is a Grampus? Google tells me it is a type of whale. Brisbane Roar gets a mention just because the good people of Brisbane went for a verb instead of a noun. Disturbing trend. I guess the Grampus was taken already.

Son Heung Min – The creative midfielder is the most famous member of the team plying his trade in the Bundesliga. The Korea Republic will rely heavily on his ability to put the ball in the right places for his forward line and how they go will largely rest on his shoulders.

The Korea Republic has the highest average IQ in the world according to the OECD.

Rd – Radon – Radon is one of the noble gases; hence it is a chemically inert, monatomic gas. It is also radioactive, colorless and odourless.

No-one will underestimate this team after 2002 but the stadiums of Brazil will be very different from the home confines of the 2002 tournament. This team is built on industry and energy without much in the way of star power. Having said that, apart from Belgium their other games are winnable. They should account for Algeria and Russia is famously inconsistent at the World Cup Finals. They are still long shots at emerging from Group H.

I’m giving the nod to the Suwon Bluewings this time. Go the Bluewings!

Kostas Mitroglou – The quality striker will be responsible for finding the back of the net for Greece and how they go will largely depend on his marksmanship.

Athens has the second largest Australian population in the world behind only Melbourne. Jokes. Greece has one of the lowest divorce rates in the EU.

Pb – Lead – Lead is a bluish-gray, soft, dense metal that has a bright luster when freshly cut. It tarnishes slowly in moist air to form a dull gray coating.

The defensive anchors of Group C, Greece could finish anywhere from second to last. They will probably lose to likely group toppers Colombia but if they can score some goals they may finish ahead of the Ivory Coast and Japan. That is a big ‘if’ though.

Titans v Warriors – Warriors (Extremely nervous about tipping the Warriors away from home but they are untouched by the State of Origin and Greg Bird is a big loss for the Titans, plus the Warriors are playing better under Andrew McFadden)

Tigers v Broncos – Tigers (The Broncos will be heavily depleted and the Tigers have learned to play without Robbie Farah. The Tigers are at home too. This will be close though)

Sharks v Rabbitohs – Rabbitohs (If the Rabbitohs can’t get up for this one on the back of underperformance and a continuation of recent representative snubbings for some of their key players, I think this might not be their year)

Do you think the betting agencies have got the bottom 8 right for the World Cup?