If this Team was a Superhero that Superhero would be – Antman

Armed with a super-suit with the astonishing ability to shrink in scale but increase in strength, cat burglar Scott Lang must embrace his inner hero and help his mentor, Dr. Hank Pym, plan and pull off a heist that will save the world (per IMDB). That pretty much sums up what the Titans need to do to get off the foot of the ladder.

I just can’t see much light at the end of the tunnel. The Titans are the longest standing national competition team in the history of the Gold Coast and they must be losing money by the bucket loads. Their brand has been repeatedly besmirched and to add injury to insult, they lost their most promising half (Kane Elgey) before the season even started. Then they lost James Roberts, their most promising outside back to a self imposed contract fiasco.

The one thing they have got going for them is that the NRL owns the licence and it desperately wants its national footprint to grow bigger than Sydney and Brisbane. To do that it needs viable teams in regional NSW and Queensland before it starts to expand any further. Until Newcastle and the Gold Coast get on their feet again I can see the NRL paying the bills for the foreseeable future. But the bucket of money is not bottomless by any stretch of the imagination. Unless good things start happening soon the Titans will be the latest defunct franchise on the Gold Coast.

Big Question – Where will the wins come from? The Titans aren’t devoid of good players but some of their younger players will have to play out of their skins for the Titans to finish anywhere other than the bottom of the table.

Top Gun – Greg Bird – For the Titans to do anything this year Greg Bird needs to stay on the field. Injury and suspension have blunted his effect in years gone by but he is going to have to avoid both and have an awesome season to make the Titans relevant. They need someone who leads by example and if he can do that maybe they won’t finish last. Every rung up the ladder will be a bonus.

Young Gun – Ashley Taylor – Moved down from the Broncos to get an opportunity and should get plenty of game time because of lack of depth in the halves. Hopefully he uses this opportunity.

X-Factor – Tyrone Roberts – He flashed brilliance from time to time with the Knights but never really cemented a spot in the halves. Should provide spark in attack.

The Big Leap – Ryan James – Ashley Taylor should show considerable improvement just by being on the field and I would have given this to Kierran Moseley but the Titans always seem to have an oversupply of hookers. Ryan James has threatened to become a premium forward for a number of years. This is the year. Rep jerseys beckon.

If this Team was a Superhero that Superhero would be – Aquaman

I can never figure out what Aquaman contributes. Wikipedia tells me the following:

Although he can remain underwater indefinitely without suffering any ill effects, Aquaman grows weak if he remains on land for extended periods. However, when Batman invented Aquaman’s water suit he was able to walk on land for an indefinite amount of time and was no longer vulnerable to a “dehumidifier”.

Adequately describes where the Knights are currently headed. They are still recovering post-Wayne Bennett and the instability left by Nathan Tinkler’s era. So this makes it the third coach in three years with further turnover of the playing list. Will they start trending upwards?

Big Question – How will Nathan Brown go? He will surely take a few seasons to shape the Knights according to his own plans. Brown has an English CV but we are yet to see whether his ideas will translate to the NRL or whether he is able to recruit adequately to see his strategy come to fruition. The NRL as current owners of the Knights will be hoping he adequately answers both questions.

Top Gun – Jarrod Mullen – Trent Hodkinson is a half of high quality who will probably take over the kicking and general organisational duties which will in theory enable Mullen to play make either with his ability to take on the line or set up the players outside him. Cruelled by injuries in recent seasons he is only 28 so still plenty of time to go.

X-Factor – Dane Gagai – Really leapt to the next level in 2015 and probably has another gear or two to go. Will need to get the ball early and often from Mullen and Hodkinson. He is the real deal.

The Big Leap – I could easily see this being Danny Levi or Joseph Tapine (if Nathan Brown will play him) who put themselves in the conversation with solid introductions in 2015 but I’ve been waiting for Tariq Sims to take the next step for a few years now. Injury and suspension have conspired against him but the next level beckons. 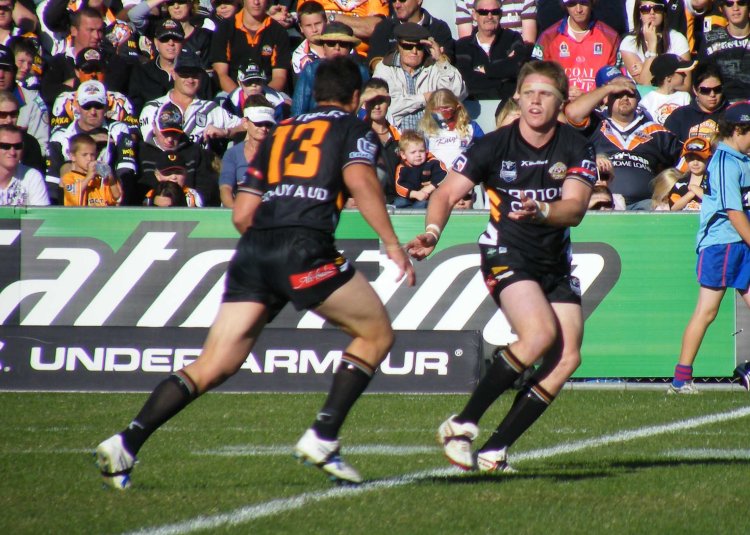 The future is now…or is it?

If this Team was a Superhero that Superhero would be – Daredevil

Blinded in an accident as a child, Murdock uses his heightened senses as Daredevil, fighting crime on the streets of New York after the sun goes down (per Netflix). For years they have been talking about this young crop of superstars coming through the ranks at the Tigers. Well through lack of foresight (the pun is deliberate) the current administration may have squandered that opportunity. Benji Marshall, Blake Austin, Martin Taupau, Andrew Fifita and Te Maire Martin have found other clubs and depth in the forwards is looking very scarce. Robbie Farah’s contract issues could’ve been handled much better (that’s an understatement) and now Mitch Moses and Luke Brooks are balking at activating their player-favoured extensions. Talk about selling the farm and having the rest walk away.

Big Question – Will the Tigers have to blow it up and start again? The Tigers have pinned their hopes on a new generation centred around Luke Brooks, Mitch Moses, Aaron Woods and James Tedesco. Jason Taylor was brought on to nurse them through. They under-performed last year with some strong showings coupled with weak losses. If they don’t start showing improvement there is a very real chance Brooks and Moses walk out the door and the Tigers have to start all over again.

Top Gun – Luke Brooks – Robbie Farah has been the man since Benji left town but now is the time for Brooks. Brooks and Moses combined to miss 2,000 tackles in the last few years (slight exaggeration) but it is their attack which puts food on the table. Brooks is still a young man but the Tigers need him to be a star in the worst possible way. Right now.

Young Gun – Manaia Cherrington – Going to bend the rules again. Not as bad as last year. I usually try and pick a player either yet to make his NRL debut or only having played a game or two the season before but Cherrington has played 11 already in 2015. Can’t really see another of the Tiger’s prospects getting a run in first grade, although Josh Addo-Carr is getting some early mail. They have a team full of young veterans. What they are short on these days, apart from Robbie Farah, is experience.

X-Factor – James Tedesco – Will figure strongly in Origin discussions along with Matt Moylan. Tedesco will be a star for the Tigers this year and if Brooks and Moses can leverage off their ability look to Tedesco being the primary beneficiary.

The Big Leap – Really should be Brooks, Moses and Tedesco jumping to the next level but Tim Simona is the one I’ll tab. He is unbelievably talented and with speed to burn, only injuries have slowed him down. If he can stay on the field for the majority of the season I see him being one of the best centres in the competition.

When will the best catchment for juniors in Sydney start cashing in?

If this Team was a Superhero that Superhero would be – Thing

Thing (AKA Ben Grimm) is known for his trademark rocky orange appearance, sense of humor, blue eyes and famous battle cry, “It’s clobberin’ time!”. In the last few years the Panthers have been a poor man’s Warriors. Mind you, the way the Warriors played last year probably means they are a poor man’s Panthers. They (the Panthers) are big, fast and skillful but fairly inconsistent. They have a never ending supply of young players coming through the ranks and this season have turned over a bevy of players searching for the right combinations. Phil Gould started off some time ago with a 5 year plan (turn over the bad contracts, trust in the young talent and supplement with experienced players where necessary) and it was on track until last season which was a significant step backwards and ultimately cost Ivan Cleary his job. This year there is a new coach in Anthony Griffin and in a way it is a new era. Like the Tigers they seem to have plenty of potential but we are yet to see it fully manifested.

Big Question – Can they stay on the field? Back to back horror years with injury have left them mid-table and out of the Finals. Will this year be a better one?

Top Gun – Matt Moylan – This could easily be Jamie Soward if he has a bounce back year but Moylan was the Panther’s best last year. If Moylan can play most of the season the Panthers have a chance to make the Finals.

Young Gun – Te Maire Martin – Given the age of Peter Wallace and Jamie Soward, picking up Martin from the Tigers was a real coup. Problem is, he could be stuck behind Wallace and Soward all season. Leilani Latu might end up playing more games.

X-Factor – Could easily be Matt Moylan again but James Segeyaro will also be key with his skirmishes from dummy half. Honourable mention to Bryce Cartwright.

The Big Leap – This is a toss up between Bryce Cartwright and Tyrone Peachey but I will go with the mercurial Cartwright. He should nail down a starting role this season.

Stay tuned for the next exciting episode on Thursday, 25 February 2016 titled ‘2016 NRL Preview Part 2 – Somebody has to miss out’